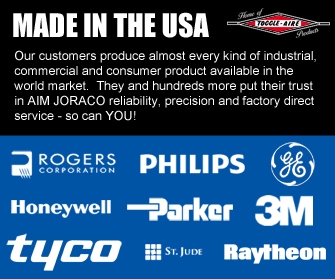 Smithfield, RI, June 7, 2013 – AIM Joraco®, “The Pneumatic Toggle Press Innovators,”, is pleased to announce European Economic Area (EEA) CE Mark approval for their Toggle-Aire press line. The fully pneumatic toggle actuated presses are certified to comply with the Essential Requirements of the Machinery Directive 2006/42/EC and further conforms with the EU Harmonizes Standards EN ISO 12100:2010 & EN ISA 4414:2010.
CE Mark certification has allowed AIM Joraco® to secure Guy Turpin of Sunlab Equipment Limited as a Distributor in the United Kingdom. “Our organization is excited to enter a new phase with this CE Mark approval and our newly established distributor in the UK.” Said Andrew Lewis, President of AIM Joraco. “This is a large step in ensuring our aggressive growth plan by leveraging over 65 years of pneumatic press experience and broadening our worldwide market.“

Since 1959 the TOGGLE-AIRE® press line has remained tried and true with few modifications and increased force ratings. Over the last 10 years the DIRECT-AIRE® straight cylinder press and HYDRO-AIRE air over oil cylinder press lines have been introduced. AIM Joraco continues to accommodate the ever changing customer base and is finding that more often than not we are providing custom turnkey solutions as opposed to standard empty presses. In keeping with the pace of years past we anticipate AIM Joraco® will be rolling out new product offerings over the coming months.